A short history of Metasequoia glyptostroboides or Dawn Redwood (over 3 million years!)

Metasequoia glyptostroboides is known to have grown in many parts of the world in prehistoric times from its fossilised remains. That it had existed as a distinct species was confirmed in 1941 by Japanese paleobotanist, Shigeru Miki, studying fossil specimens from the United States.

By coincidence also in 1941 a Chinese forester, T Kan, with the Red Army partisans came across an unusual deciduous conifer in the village of Mo-Tao-Chi, Szechwan Province. He arranged to have leaf samples sent to the Botanical Institute in Beijing where in 1946 Professor Hu, who had seen Miki’s published work, alerted the world to the existence of a tree thought to have died out 3 million years ago. Other stands of the tree were subsequently found in Hupeh province.

Interestingly western plant hunters such as Robert Fortune and E H Wilson had missed or overlooked the trees significance in the 19th. and early 20th. Century. Many plants that are now very much a part of our parks and gardens originate and were collected from the area. Anemone huphensis, Arundinaria murielae, Sorbus huphensis, etc.

In 1947, the Arnold Arboretum at Harvard provided funding for a seed collecting expedition, and then in 1948 samples were sent to the world’s main botanical gardens, (Cambridge University Botanic Garden has at least two tall trees from this first batch of seed) since when it has become increasingly popular. 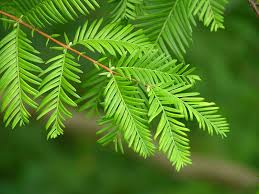 In the late 1980s, it was realised that many of the second-generation trees in cultivation suffered from low genetic variability that could lead to increased susceptibility to disease and reproductive failure. This was because most of the trees were grown from seeds and cuttings derived from as few as three trees that the Arnold Arboretum had used as its source. More widespread seed-collecting expeditions in China in the 1990s sought to resolve this problem and restore genetic diversity to the cultivated trees.