In general, the Californian poppy exhibits a growth form that is low-spreading to erect  (0.5 – 2 ft) with basal and cauline foliage that is generally blue-green (glaucous) in appearance. Plants produce upright flowers on freely branching stems with four satiny petals, coloured bright orange to yellow; flowers may also have distinct, darker orange centres.

Eschscholzia californica has become one of the signature plants in Church View gardens. http://www.engcougars.co.uk/church-view

Some folk perceive its flower colouring as being raucous, coarse or demanding, but it is never any of those things here. It is not dominant or over powering nor does it diminish the attributes of the plants we have chosen to be its close neighbours. A thing of beauty in it’s own right, here it is not only part of the mix but is one of the repeated key plants which serve the purpose of tying the whole together.From very early in the design process I had decided the main garden would need to be full of flowering plants, no room for lawns, (‘plant heavy’ as Tim Longville later described it!) and the delineating pathways would have a gravel surface. This arrangement served many purposes, addressed several problems and made possible our desired aim to create a spectacular, floriferous garden, with a long season, which belies it origins as, and defies the constraints of being, a small enclosed back garden!

As I started to think of the planting combinations possible that could be accommodated and suited to the situation here, one of the first plants that I wanted to associate with the gravel was Eschscholzia, an image of the Californian poppy ‘popped’ into my minds eye. The image I had was of its, delicate looking, golden /orange blooms reclining on glaucous bluish foliage basking, almost languishing, over the sun-warmed gravel path in Summer. An ambitious thought here in Cumbria! But having gardened for most of my career on less than perfect soils in areas of high rainfall, and cold winters, I knew we had a good chance of achieving this minor triumph on such a south facing sheltered slope with its deep, light, well draining soil. Incidentally, the other image that arrived at the same time was of Aster novi – belgii ‘Purple Dome’ doing something similar, flopping onto gravel pathways, in lower, weaker, Autumn sunlight. I always immediately think ‘what comes after, what goes with and what contrasts nicely’ when imagining plants in planting schemes! (Maybe I shall write about Asters, or how my planting schemes come to be, another time.)

So it was that Eschscholzia would be one of the annuals sown as soon as possible along with Nigella, Cornflower, Foxgloves, Cleome, Limnanthes douglasii (poached egg plant, interestingly and coincidently a West coast North American plant introduced by David Douglas) and several Poppy varieties of the Papaver genus. Combined with bulbs these annuals would carry the burden of providing a lot of the colour during the new garden’s early days and we would rely on them self sowing into the gaps between the permanent plants to bulk up the floral display for a few years. Commercially available Eschscholzia seed tends to be of highly bred named varieties, but I was able to obtain some seed of mixed but unnamed stock. These, as hoped, mostly produced straight, close to species type plants, and by the second year the odd white or wishy-washy yellow had,as hoped, disappeared all together!

We have the aforementioned Scottish plant hunter David Douglas (1798-1834) to thank for introducing the Californian Poppy to these shores and our gardens. Douglas is probably most famous for discovering the trees, Sitka Spruce and Douglas Fir, also the flowering currant (Ribes sanguineum) amongst several others, during 2 collecting trips in North America between 1824 and 1834. Those of you paying attention will have noted with interest the correlation in his death date and that of the end of his last trip! It happened that after a hard, difficult and eventful second visit to North America, during which he almost lost his life as well as all his specimens in a canoe accident, he decided to stop off at Hawaii on his way back to England. Here whilst moving through jungle, on the look out for plants, he fell into a pit-trap dug by natives to catch wild cattle, his body was found later- quite mangled- a bull was also found in the pit! Or so the story goes, whatever the truth, he lost his life and never made it back home. Plant hunting, a dangerous occupation indeed, we gardeners are indebted to these peoples courage and fortitude.

David Douglas is said to have found the Eschscholzia seeds he collected for the Royal Botanical Society of England in a southern Oregon location. It is though also native to the western United States from southern Washington south into Baja Sur, and from the Channel Islands and Pacific coastline east to the Great Basin and regions of the Sonoran Desert.

Eschscholzia californica was proclaimed the official state flower of California in 1903, where its seeds germinate with the winter rains and shorter day lengths and in Spring the wonderful bright flowers transform its homeland hills into spectacular, unending sheets of gold. This display appears to be better following a wet winter – dry winters seem to produce a lesser display. 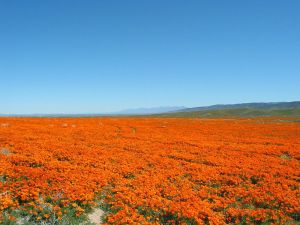 Whilst it must be stressed that California poppy should be regarded as toxic if taken internally, it has cultural significance for many indigenous people of the western United States. Some tribes consider the plant poisonous, but others make use of the plant, as both a food source and drug. The roots have been used as sedatives and analgesics while the flowers, high in carotenoids and somewhat sugary, may be chewed as a gum or sweets, while the rich pollen of the flowers serves as eye shadow or body paint for special occasions.

Living up to how it is generally described, i.e. an annual or short-lived perennial, at Church View it certainly flowered in the year it was first sown. Thereafter it self sows where it is happy, some young seedlings over winter and flower in their second year, and some seem to succeed in flowering for at least 2 years when the Winters are not too hard. The flowering season of these established colonies is long with some flowers opening late May and the latest blooms being brought to an end with the first substantial frosts, this year they survived several light frosts in October before being caught in November by more severe night time temperatures. We have to restrict its seeming desire to colonise whole swathes of the pathways from time to time and this abundancy seems to support my observation that Eschscholzia suffers very little, if any, damage or setback from pests or diseases. It proves to be attractive to bees and other insects, no doubt seeking nectar and pollen, encouraged by its simple, single flower structure.

Eschscholzia californica, a very beautiful and most useful plant if you have the soil and aspect to accommodate it!